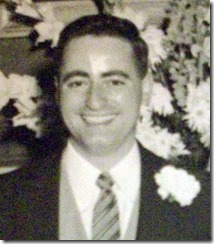 It was eight years ago on election evening that my father passed away. I had been living in Los Angeles and my first child was only 6 weeks old when my mother called and asked that I come home to Boston. I left my wife and new born daughter alone in L.A. and flew home to see my father one last time. He had been rapidly declining over the past several months. Years of diabetes had ravaged his extremities; in the last few months of his life he was forced to become a double amputee due to neuropathy in both his legs. He lay in hospice all week before the election of Barack Obama. His bed was setup in the living room. My family flocked around as he came in and out of morphine dreams. We prayed with him, remembered with him and said our goodbyes to him as election day approached.

My father was a Democrat. His older brothers and sister having gone off to fight in WWII, he stayed home listening to FDR’s fire side chats on the radio with his immigrant parents. His oldest brother, Robert, never came back. His own father had become a citizen by signing up to fight in WWI as an American soldier. There was a lot of sacrifice and commitment to the mythos of America in my Dad’s early life. It didn’t help that he was an idealist with a penchant for fantasy.  He loved tales of revolutionary war characters and the grand symbols they represented of rationalism, freedom and rebellion in the face of tyranny. He urged us all to read Johnny Tremain (which come to think of it, I never did…so I just now ordered it on Amazon.)

My Dad had an idealized view of American egalitarianism and civic justice.He held the “Bill of Rights” to be sacred.  I imagine that he was too busy trying to feed 7 children during the sixties and seventies to be much phased by Watergate, Vietnam and the plodding end of American innocence. The subtleties of politics were not for him. He saw politicians as decent protectors of justice or rat bastards (and usually on party lines.) Like many, he saw things in broad strokes and tended toward extremes. It was rage or joy, love or hate, understanding or complete bewilderment. I don’t mean to paint a picture of him as a shallow dullard. On the contrary, he loved to read, paint, listen to classical music…I think it just came down to the fact that he was an honest hard working person and in his experience the choice between right and wrong was a clear and unambiguous choice.

My eldest sister came for a visit this weekend prompting memories of my father. She told a story about my father being in the hospital after his first leg amputation. As the story goes, he was alone in his hospital bed the night after the surgery when he was awakened by the urge to pee. He realized, “how am I going to get to the toilet with only one leg?” So he buzzed for the night nurse to help him, but no one came. He tried yelling out, but no one heard. It was becoming an emergency.

He remembered that he had a phone next to the bed, so he picked it up and did the next logical thing in his mind. He dialed 911.

“911 Operator what is the nature of your emergency?”

“Yes, hello. My name is John Paradis and I am a patient at Mt. Auburn hospital,” my father said calmly.

“And what is your emergency sir?”

“Well, I have had my leg amputated today and I am not able to get out of the bed. I have buzzed for the nurse but no one is coming and I have to pee.”

“That’s your emergency?” says the 911 operator.

“What is your room number at Mt Auburn sir?”

And so indeed the police were alerted, they contacted the hospital directly and in short order they came to aid him in his emergency. The next day he was a legend among the hospital staff, but to my father it was a natural exercise of civic rights. They say protect and serve and he takes them at their word. 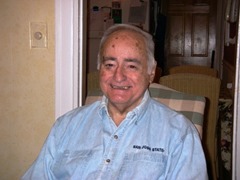 cared for him. He battled stroke, heart disease, diabetes and neuropathy as mentioned. But worse, he did it all while suffering through the presidency of George W. Bush and his cronies who proclaimed that they would be forced “to work on the dark side” and in so doing managed to dismantle much of the bill of rights that my father held so dear. The last year of his life he spent fairly cognizant of the world around him and strongly disappointed in the U.S. government. The quick ascension of Barack Obama to the democratic candidacy for the U.S. Presidency was a hopeful murmur in the background during his last months.

Obama’s election, for all that one may criticize of his presidency, was a moment of historic pride and rekindled faith in the American system which seemed to have fallen so far at that point in time. For many, including my father, his candidacy was a desperately needed sign that things were not so irrecoverable. He hung on all the way to election night until we were finally able to tell him that Barack Obama had been declared President of the United States. A much awaited exhale occurred across the country, and for my father it was the last. He died just around midnight on election day.

I am no great fan of the American political system – there is much that needs fixing and seems unfixable. Perhaps I will feel better after reading Johnny Tremain. I do carry the reverence for civic duty that my father and mother bestowed on me and a faith that people involved in local governance are rational and respectful of neighbors. We all could use more help fighting against our tendency toward dominant paradigms and adversarial procedures. Modeling respect for one another, tolerance and inclusiveness of perspective in the public square is much diminished. In my opinion it is just bad parenting, and I look forward to the day when some well raised adults will take over governance. I hope my children and their peers will contribute to this.

The strict father model is a lazy model in my opinion and tends toward short sightedness and prejudging. I go there a lot, but I know when I do. I have found that being a nurturing parent doesn’t have to mean you are overly permissive but it means you have to be open to self-analysis and change.

I am grateful for the presidency of Barack Obama, and I think my father would have been happy with how he conducted himself. For sure, it was not a perfect job and much was left on the table, but I think he managed to bring some decency and respect back to the office.  As his wife Michelle says, “we go high when others go low.” My father would appreciate that tremendously. Barack Obama seems like a very good father himself and I am so grateful that he and his family will make it out of this relatively unscathed. I know he prayed to God for this. I am glad God is still listening.

My father was the parent of six daughters and one son. His children went on to produce an overwhelming number of female offspring. He would have 12

granddaughters and 3 great granddaughters right now. Two of those girls are mine. They are all fierce, all brilliant, all capable and all ready to be respected for the unique powers and perspectives they can bring to bare. The men folk have lead us in an interesting direction over the last 2000 years. I am hoping we can see a shift now toward balance and that this election is historic demarcation of that beginning.

With these principals in mind, I stand ready to do my civic duty. I know my dad will be staying up to see the outcome of this one too.