Planning my next trip across the U.S. This time it’s got to be speedy.

I think this will be my route:

They who would give up essential Liberty, to purchase a little temporary Safety, deserve neither Liberty nor Safety.

I was listening to yet another plead for good people to step away from Facebook because of privacy issues. This time the plead is motivated by yet another encroachment on privacy called the Facebook “Listening” feature an audio identification tool that records sounds in the room when you post on your phone. 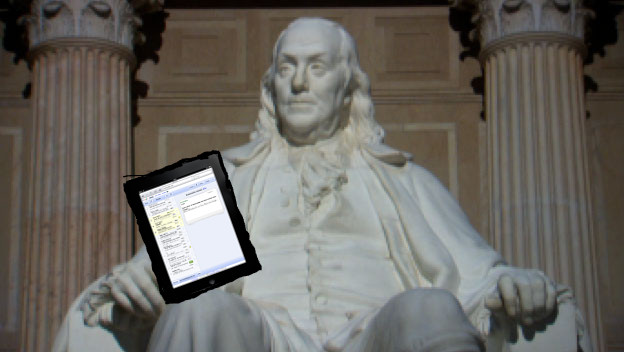 The Benjamin Franklin quote above always came to mind for me during the post 911 congressional freak out, when most of congress agreed to wipe their assess with the bill of rights. It struck me as very un-american. It made me sad even, because my dad had always proclaimed the importance of the bill of rights. It seemed like we were being reactionary cowards and abandoning the principles of freedom, liberty and equal justice (even though I know we only ever aimed at these things and didn’t really have them, it seemed now that we were spitting in the face of our highest ideals…I’m not a libertarian, but I share this view of privacy with libertarians.) But then came Gmail, Mint, Facebook and the rest. Where we pretty much agreed to abandon many of our rights to privacy.

Instead of giving up privacy for a little security, we are giving it up in order to participate in the new public square and to have access to free stuff. It’s weird, but it seems an inevitable march.  Frontline has a nice piece about this called “Privacy Lost.” As a counter point, Tim O’Rielly has this perspective. I think some of Tim’s points are a bit flawed, like where he says that people don’t have to use it if they don’t want to. I never liked that self-determination argument too much. It’s just used to justify a lot of misery in my opinion.

I am not quite sure what my thesis is with all this. It’s just some interesting bits about the state of politics, privacy and technology in these random times we are living.